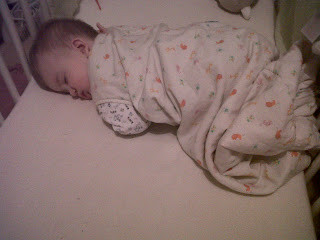 How do babies sleep all scrunched up like that?!

Every time I went to check on him he'd moved round 90 degrees until his knees were tucked him and he looked as though he were praying to Mecca!!!

I find myself wondering how much Joel understands at the moment.

If we talk to him, he listens, and he certainly knows what ‘no’ means.  Maybe it’s the tone with which we say it rather than the word itself.

This is the face I get at dinner when he’s considering flinging his food.

This morning we’ve been up since 6.30 and my Mum has recently bought him a V-tech walker from Ebay and he decided to play it with his feet, but when the annoying puppy said ‘clap your hands’ he did!!

I then sat him up and kept saying ‘clap hands Joel’, ‘Mummy says clap your hands’ (in manner of simon says like puppy), ‘if you’re happy and you know it clap your hands’ and he didn’t do it again.  Coincidence?  I’m not sure!!  I know I’m biased but I think he’s a clever little boy!!

He’s been to my parents today whilst I’ve had a day doing bits for Steve and general housework which is so much easier without Joel to watch as well and they sent me this:

It seems he wanted to go straight to his toys without even taking his hat and jumper off!!  He loves that ball toy and hammer they’ve got and he puts the balls in the right holes and everything, very carefully!  My parents think it’s very funny as they can’t even pick the balls up once in the holes, they have to push them through!

What else have we been up to since the last post?  Just lots of playing really.  Trying to think of new things to do every day such as:

And going out for fresh air to the castle with Izzy to play around:

Every day seems to bring something new.  He’s now getting into a proper crawling position on all fours, he can get around faster every day.  He’s very careful at putting things in things, he’s learnt smaller things can fit in bigger things and he loves to clap and applaud himself when he gets it right!  His palette is expanding as well and he’s very good at eating most things I give him.

He was a bit ill this week with an upset tummy for a day so I looked up online what he should be having and found the phrase BRAT – bananas, rice, apple sauce and toast!  So he had bananas and toast for breakfast for a couple of days, pasta with a bit of grated parmesan and olive oil, stewed apples, risotto and lots of toast and he was fine very soon after that.  Except that now he’s come down with a few sniffles so has gone to bed at 5.30pm after hardly any tea (fish pie which will be lunch tomorrow for him now) so I’m anticipating a bit of a rough night.  I can envisage us both up watching Waybuloo on catch up eating toast at 1am so we’ll see how we go and whether we make it to Mums and Toddlers in the morning! 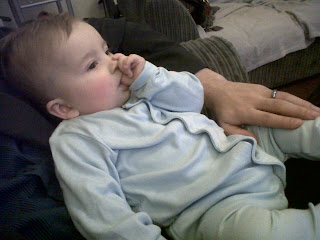 We are entering a new phase of babyhood at the moment where Joel is earning a new nickname of  ‘Pickle’.

He has decided to test his boundaries and is becoming more challenging by the day.

At the moment, he’ll calmly look me in the eye during meals and toss his food over the side of his high chair.  I say ‘no Joel’ in a stern voice and he regards me, as though to say ‘what are you going to do about it’ as he just throws more food over.  He knows what no means, I’m sure of it.

Today he was just throwing his eggy bread about, so I took it away and gave him a yoghurt for his pudding and that was it.  He hasn’t asked for more food.  He’s having quite a bit of milk so I guess he’s having his nutrients from that.

He also yells a lot.  For no apparent reason other than the fact his Dad sometimes lets out yells, and roars (he thinks he’s singing) so Joel too shouts a lot.  And screams.  He can be quite shrill at times.

He’s been having his inductions at nursery, and this morning I dropped him off for an hour to leave him there on his own.  When I got back, he was red, he’d been crying and the nursery worker said that that he’d been playing and fine, and suddenly, just began yelling.  She put it nicely, but as she said ‘he has a good set of lungs on him doesn’t he’ I knew he’d been loud.  Mind you, he’s been loud since a tiny baby, and the Dr’s have made the same comment, so I doubt that’s the last time I’ll hear it.  At the nursery he was munching a bread stick whilst sniffling so I don’t think he was too upset, (if he’s really cross then food won’t placate him).

He’s going to go back next week for lunch time so we’ll have to see whether sitting with the other toddlers and babies helps distract him from the fact I’m not there, so he gets used to be dropped off.

But he’s also so clever, and bright, and funny, and charming.  He takes time now over putting his Lamaze fish in their fish bowl.  He carefully takes them out, and puts them in again over and over.  This can occupy him for 20-30 minutes!.  I showed him that he could fit balls into some of his stacking cups, but not all, and he’s delighting in copying and putting smaller things in the bigger cups.  He looks so pleased with himself and claps and beams when it’s worked.

I’ve also shown him Timmy Time on CBeebies, and he loves the introduction and theme song and bounces and claps along to it.  The actual program doesn’t hold his interest but we sing along to the song which is fun.

He’s been napping now for a while.  I must admit I’ve left him longer than I should, as it’s been peaceful but it’s time to see whether I can wake him up and then it’s play time again!

I’ve had a right week of it this week!

On Sunday my MIL was visiting so I got the vacuum cleaner out, plugged it in to go round the lounge and ‘whirr’ it just died.  I was cross as I’ve only recently had it fixed up, and decided to check the plugs.  It seemed to be the plug socket which was the issue, not the vacuum as that worked when plugged into the kitchen.

So I ignored it and went to church and met Wendy, we went out for lunch and on getting home later on I realised the extent of the issue.

The plug sockets in the lounge were not working, neither were the bedroom sockets.  This includes the socket which controls the combi boiler, so not only did we have no tv or heating, the internet had also disappeared.

I got onto Virgin straight away and they promised to send an engineer out on Tuesday, and on Monday I used my mobile to ask for the details of an electrician.  Thankfully, a friend’s Dad is an electrician and he came out at lunchtime on the Monday.  It turned out that a whole circuit had died, possibly due to a slow burn of a wire, and he’d gone round every socket testing them when I remembered the boiler socket.  It turned out to be that one, with a faulty wire in a junction box.

All these months of boiler issues, and the problem could have been electrical.  I’m trying not to think about that.  The main issue is that everything is fixed and sorted now!

However, the internet and tv weren’t.  The engineer came out on Tuesday and said it wasn’t my modem, there was a different issue outside, and another engineer would need to see to it that night.  Wednesday, it still wasn’t working and I called again this morning and was fobbed off more!

Finally, another engineer came out to say that there had been a power surge which had frazzled the cables and it’s all fixed and I have the internet once more. I was going rather crazy without it.  I’ve come to rely on it rather a lot!!

All this and with the extra issues from Joel.

He’s becoming a bit of a pickle to say the least.  And that will be another post entirely.

My little tiny baby was born 9 months ago today.

Hasn’t he grown up nicely! 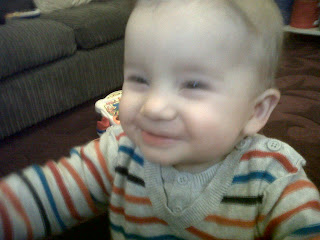 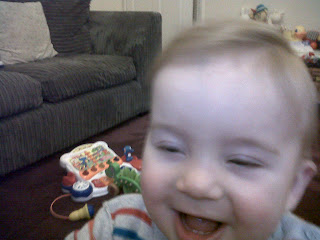 This is Joel playing with me! I was blowing in his face and bouncing him on my knee and he was just so very cute!