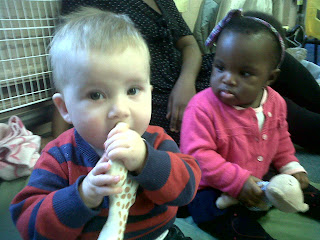 The two of them are growing up and look so much bigger then their previous picture!! 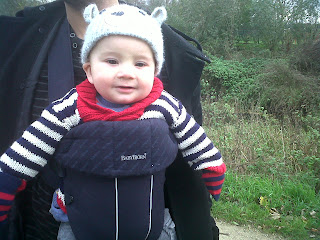 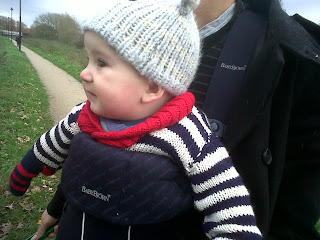 I think we’re beginning to get our first little bouts of baby tantrums!  He is starting to learn what he likes and wants!  And in his little baby world he doesn’t know what ‘no’ means yet, and it’s interesting to see what he’s making of life now and how I respond to him to help him learn.

On Wednesday we were at our singing group and having played with a maraca for the duration of the musical instrument segment Joel dropped it on the floor and another kiddy snapped it up and ran off with it.  Normally Joel wouldn’t react and would just look around for something else to do or look at, but this time he watched this other kid disappear with the toy he’d been playing with and he began to cry.  Then howl.  I’ve not seen anything like it!  He really wanted that maraca back!

Then later that afternoon!  He grabbed the tv remote control, and was having a good chew on the end of it, and dropped it.  I noticed that the tv box said ‘999’ so was glad it wasn’t the phone he’d got hold of!  Anyway, I hid it under a cushion as I’m trying to keep them out of his reach and again, he realised it’d been removed and got very grumpy indeed and began to properly cry again, with tears and everything! Time again for distractions….!

At mealtimes the challenge has begun to get food into his mouth!  He happily chews things up and is beginning to reject his purees for proper food so is having leftovers of our meals all cooked without salt!  He had chicken casserole for lunch, and sandwiches and cheese sticks for tea.  Distraction is a brilliant tool, but every trick I try, the next day, he remembers it and that one doesn’t work any more. 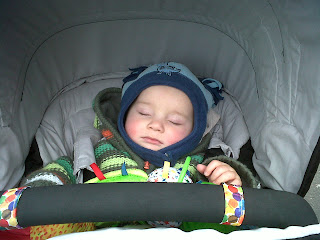 There seem to be lots of loose ends floating around my life at the moment.  I don’t like feeling as though I’m not sure what’s going on totally, so here’s a round up of my thoughts at the moment:

Appeal – I rang personnel at work today and they confirmed that my appeal letter had been received.  I still haven’t had a response as yet and am feeling more and more stressed at the thought of the hearing that will be coming at some point soon.  I’m not good with confrontation and have to gather evidence and further information to help my case.  I’ve asked for my job description to be sent, I’ve got a copy of the University’s work ethics brochure and personnel also suggested getting some written support from work colleagues which will be hard to do but I’m seeing a colleague tomorrow so will discuss it with them.

Nursery – I have collected the forms from my local nursery and the thought of dropping Joel off there on his own tears me up!  He gets upset if he’s away from me at the moment and I know he needs to learn I can go away and come back but it’s hard.  I feel like we’re starting to get into a time where we need to set some boundaries but it’s so hard.

Joel – is so brilliant at the moment.  He is sitting up so well and sits and plays for ages so nicely.  He doesn’t try to pick his toys up to put in his mouth now and keeps himself busy with his v-tech driver toy and pop up toys.  He looks so much older this week as well and has a good head of hair which makes him come across as older as well.  My baby is a little boy now!  He’s really mobile and rolls about and shuffles and does this cute army crawl as though he’s under the nets in the mud!  He loves balls and passing them from hand to hand.

House – My house is currently on the market and we had a viewer last week but he’s not sold his so is not in a position to put an offer in, so we’re just waiting still.  We’ve been on the market for almost 10 months and not a lot is going on which is a pain.  We’ve been babyproofing the lounge though with Joel rolling around lots and we’ve mounted the tv  on the wall and got rid of the tv cabinet.  We also took the changing table down which has been in the lounge for nappies and toy storage and the room is so much bigger now!!  We’re going to get a storage box/seat which will house his toy collection.

Sleeping – with teething being disruptive we had a great night last night!  He fed at 10pm and slept till 6am and after a feed went back to bed till 9am!  I was awake before him at 8.30 and managed to get dressed, have my breakfast, hang out a load of washing and get his lunch together before he woke!  Fab!

My main source of stress is definitely the appeal.  It feels as though it’s a black cloud hanging over me.  I just hope it’s resolved by Christmas.  I’d hate to think I was having to worry about it during what should be a happy time.  No, Christmas will be happy regardless I’m sure.  I am so very excited about Joel’s first Christmas and have bought him a personalised stocking which I’ll put some little bits in like bubbles, and treasure basket type things that he can chew on and rattle!  We’re having Christmas Day at home which I’m really looking forward to.

And here’s another picture of the reason I need to appeal!

I want to be the one there for him for most of his early days.  He’s my top priority now and work will have to accept that, whatever they decide.  It may make for some tough decisions but they won’t be tough really.  As long as he’s happy then I’m happy!  And how cute is his hat?!  He has two courtesy of his twin cousins!!

Every few weeks the regular 4am wake ups seem to get to me, and I need time to myself.  As it’s Sunday I’d gone to church to play in the worship group but got there and burst into tears with tiredness!  So I came home and Steve went off to Church with Joel in the buggy and Izzy so I could have the house to myself.  I miss Joel terribly but it is nice to have a few hours to hang out in bed and catch up with Desperate Housewives and do a little blogging.  My next plan is to have a nap and catch up with sleep.  I’ve had a cup of tea, a bit of a weep (tiredness does that to me) and I’m trying to formulate a plan to get him to sleep through again.  I am thinking of offering water at the 4am wake up to see if that pacifies him to get back to sleep without milk, as he’s not having milk from me in the morning at the moment, and it’s becuase he’s full from his 4am feed.  I need to push him along a little bit but to be honest, I’m that dozy when I hear him cry I forget my plans and just offer him the boob as it means I’ll probably get to sleep that bit faster.

I’ve looked on the babycentre forum and it seems Joel’s sleep pattern is quite normal for a breast fed baby at 7 months old but it just feels like hard work at the moment for me.  Steve works every day so it feels my job is looking after the baby, but to my mum it seems that she thinks I do it all and Steve doesn’t help.  Well, he doesn’t at night, he is rubbish after hours and I’d worry about Joel being dropped or squished and I’m the one who wakes and hears him that Steve doesn’t do so I’m awake anyway, whereas my Mum wouldn’t hear me as a baby so my Dad was the one who got up and she thinks that’s the way it ought to be!

Maybe I’m just feeling more sensitive as I’m tired.  I know folk aren’t judging me, but sometimes it just feels harder and that I worry more I’m doing things wrong.  I guess they don’t want me to be tired either and think suggesting formula is helpful.  I know he should be sleeping through, he’s on three meals a day and therefore doesn’t ‘need’ a feed in the night, he’s just used to it and that’s when he’s having his breakfast milk.   A couple of times in the last fortnight he slept till 6.30, through so it can be done.  I’ve got to me more resilient and write off a couple of days where I’m putting sleeping though into practise.  I can’t do the controlled crying.  I’m not that way inclined so I’ve just got to pull myself together and see what I can do at 4am and water and cuddles it is.  Lets see how this goes.

Then The Baby Carriage
Create a free website or blog at WordPress.com.