Joel is now a rather movable baby!  This past week he’s really got very good not staying in the same place where he was left!  As he’s only 14 weeks he’s not crawling or properly rolling yet, but he can swing his legs and shuffle his body so he can spin around on the spot, combined with side rolling to his left and right and also lift up his body by pushing on his legs to his shoulders and then sliding along that way!!

It also means that nights are a little disturbed once more as I keep waking to find him ‘chatting’ about the fact he’s in a crumpled heap at the bottom of his cot with head and feet on a diagonal hitting the sides!

Of course, we’re still on our jollydays this week so it’s all taking place down in the west country and he’s in travel cots so what will happen once we’re home I don’t know but it’s quite amusing, bar the extra get ups at night!!

Well, I can only assume that it was the effects of the jab which in turn made him sleep A LOT yesterday which then made him wake in the night at 3am and 5am.  Curiously, I woke up first again which makes me wonder whether it’s an inate thing??

Yesterday was actually a good enough day, and Joel showed no other symptoms other than the fact he slept far too much but I didn’t have the heart to try and wake him.  Anyway, we were walking miles with the pram so that could have had something to do with it too!

We met Sally and Kelly from my work for lunch which he slept throughout, then we went to a baby massage class on which there will I think be a separate post!!  And as I was tired and we’ve not got a lot of food in due to going away for a couple of weeks tomorrow, we ordered pizzas for dinner!

So now our day is a bit out of whack, but I’m sure it’ll come together again at some point!

With the summer holidays upon us, all the classes and groups we were going too (ok, Mum’s and Toddlers and Bounce and Rhyme) have finished for 6 weeks!

But we signed up for baby massage a while ago and these classes are running over the summer so we’ll have something to go to if only once a week!!

They are Thursday afternoon the first one was ok.  I’m not sure Joel likes being massaged.  He was wiggling away from me and it was hard to massage his limbs as he got further down his mat!!  But it was interesting to meet the other mums there.

One of the Mums I’d met before at the NHS antenatal classes which was nice!  Turns out her son Jacob was born the day before Joel and they lay on mats next to each giving beaming smiles which was lovely so I think they’ve made friends!!

We have to miss the next session due to being on holiday but will catch up the later weeks.  I’m hoping to make friends with the other mums too, as it’d be nice to know other ‘first time mums’ as I think it’s quite different when you’ve already had other babies!!

Joel had to go for his jabs yesterday at 12 weeks and 6 days old and I was anticipating lots of crying and a bad night, but to my surprise he didn’t even whimper at the two injections at all!!  I was all ready to feed him to soothe him but it wasn’t necessary!

I also took him to be weighed at baby clinic and he wasn’t as heavy as we’d supposed at 13lbs 1oz and home we came.

He got a little grizzly at about 5.30pm so we dosed him with paracetamol, which he doesn’t really like and spits out, and we let him skip his bath as he’d only get more upset not being in the right mood, and went straight to bed.

He was awake at 4amish so I fed him and stayed with him till morning.  We were both sleepy and after a disrupted night slept in till after 7.30!!

We’ve had a bit of a grizzly day, but he’s still been good as gold.  He’s just wanted extra cuddles and after another dose of calpol this evening and a giant but runny poop he seemed to perk up a bit and played on his mat and had a nice bath before going to bed. 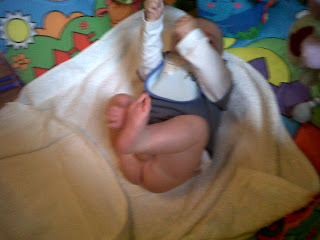 This afternoon he’s been working out that he can roll onto his side and it’s been so funny to watch!

He’s been able to flail his legs to the side for a little while but today he drew his legs up and pulled his arms in and waited until he toppled! 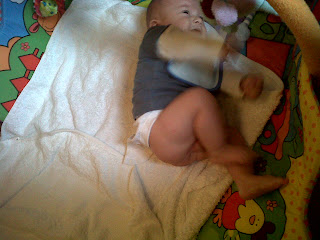 He then went back onto his back and did it again and again as though he were practising!

He was only going left today, by the time he thought about going right I think he was tired as he’s now napping in my arms as I write this via blackberry!

What a star he’s been today! 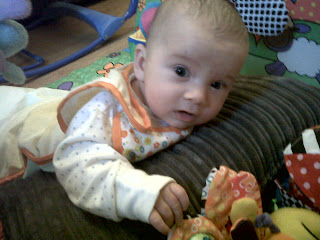 Hmmm, this seemed to help a little!
Sent from my BlackBerry smartphone from Virgin Media