Thanks to the fact I have a lovely, and pretty easy going baby, Mum and I were able to take him shopping today!!

We went to Bounce and Rhyme first and then met Mum for a lift to Hanley as I’m in need of some new shoes for the wedding on Saturday.  Since I’ve not worn heels for so long and my joints are all still feeling rather weak, I couldn’t face the thought of wearing my high gold heels so wanted to find a pair of low kitten heels, in gold and slingbacks.  I don’t know if it’s normal at this point although I’ve read the hormone which makes your pelvis softer in preparation for birth is still in your system for up to six months afterwards so at the moment I’m hobbling around feeling stiff and my ankles need extra support and I’m too scared to carry Joel in heels that I don’t feel safe in.

After a little bit of searching I found a pair in Debenhams which were half price in the sale and exactly what I was looking for.  Hurrah!  I’m hoping the gold shoes and bangles will go with my purple bellamama dress.  All I need now is a big pair of pants to get rid of the VPL and hold my tummy in and I’m sorted!

Joel was so good all day.  We got to the shops about 12.00 noon and went straight to a cafe for a sandwich where I was able to feed him, and then he slept all around the shops, getting lots of comments on his cuteness from old ladies and we were even able to stop off at Trentham Gardens on the way home for Mum to get some presents whilst I fed him in the car and then we lay on the grass so he could enjoy the fresh air and kick his legs about a bit.

Once we were home he was quite shattered and had a very good sleep but that didn’t stop him going out like a light at 7pm after his bath!!  Lets see what time he sleeps until tonight!  Tomorrow we’re going to Leeds for the day so I hope he’s as good again!!  🙂 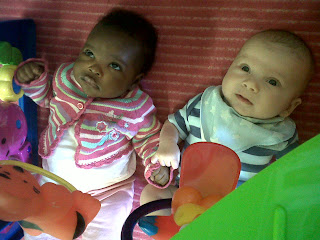 Here’s Joel and Trudy together under the baby gym at Mum’s and Toddlers this morning 🙂
How cute are they?!

Forgot to say as well, Joel grabbed a chicken from one of his dangly mobile toy things, and put the chicken’s tail in his mouth!!  Whether it was deliberate or accidental, it impressed me greatly!  He certainly knows where his mouth is as his hand, fingers, thumb or all of the above are pretty much in it all the time at the moment, but to grasp a toy and put that in his mouth?  Well, that’s new!!  🙂

Last night I was going to bed at 10pm and thought I’d have another go at feeding Joel there and then to see whether it would mean he slept longer through (hopefully till 7am!)

He slept through the feed which meant it was easier to put him back down afterwards and there were no issues there, and to be fair to him, he did sleep until nearly 6.30am this morning, but I didn’t benefit due to the mugginess of the weather as I was awake at 2am and slept rather fitfully.

But, having yesterday attempted to feed lying down, we had another go today and it was lovely.  I got to be dozy and relaxed and he gets to be cosy and nurtured and feeds well that way.  We spent an hour like that this lunchtime and both felt better for it I think.

I’m going to take a photo and post it as I think it’s a lovely thing but I will title it as such so those who may be offended don’t have to see!  Who knew I’d take so well to breastfeeding!?  Certainly not me!

It’s been about 27 degrees here today which poses all sorts of questions!

What to do with a baby!

Socks or no socks (no socks).

Time outside or stay inside?  (outside until 11am then inside until 3pm then outside again!)

Stick to feeding routines?  (Just fed on demand and got greeny poop for it which means lots of foremilk has been drunk but I guess that’s a good thing on a hot day)

We’ve just put him in a vest tonight to reassess at my bed time of 9.30 as the gro thermometer was indicating red with a sad face, and 25 degrees which is waaaay to hot for what’s recommended for a baby.  I hate the sad face on things as it means baby will not like it.

Anyhow, he woke himself up just, for the first time in ages!  He actually cried!  I was so surprised to hear him through the monitor!  He had another feed to settle himself down, and has gone back to sleep again.  Poor Joel, he’s not been terribly happy in the hot weather, although first thing we had some lovely smiles!  Here’s some pictures from today: 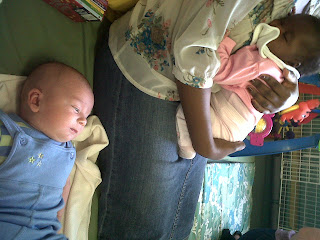 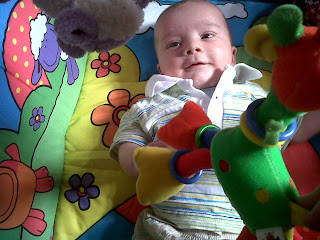 I write this today from an offended perspective. My husband this morning told me he knows better than me how to look after a baby.

I’ve been doing all night feeds and 7am feeds and this morning Joel was up and awake at 5.30 so up I got with him.

It’d be nice to be told I could have a lie in one day but apparently I have to book these in advance being psychic to know what nights will mean I’m more tired to fit in with HIS work schedule.

This led to a bit of a fight and as I’m so tired today (swaying on my feet) I’ve left Joel in his hands and the poor child is being subjected to guitar playing and singing having been on his Dad’s knee whilst he works on his computer. Steve won’t play with him on his gym mat or anything like that, apparently that’s ‘my way’ not Steve’s way. Never mind what Joel likes to do.

I just wish that Steve would try to engage Joel in what he needs rather than what Steve feels he wants. I’d feel a lot easier leaving him that way. I can hear Joel now being bored as the guitar playing has gone on too long for him and he needs a change. Poor thing, but if I tell Steve this I’m being a nag and ‘butting in’.

I support Steve by dealing with the night feeds and not asking for much in return as I know he’s busy, I just wish he could let me have some time to rest in a morning once in a while without having to worry about Joel’s well being or book the time in advance which frankly is a selfish and demeaning request.

Husbands, who’d have them?

EDIT: – we made friends again not long after we argued and I wrote this post.  I acknowledge I was horribly tired and grotty and he couldn’t cope with my grottiness.  He also was sorry for saying some things and I guess that’s just what having a baby can do for a relationship from time to time.  I’m sure it won’t be the last argument either as I do get very grumpy when tired.